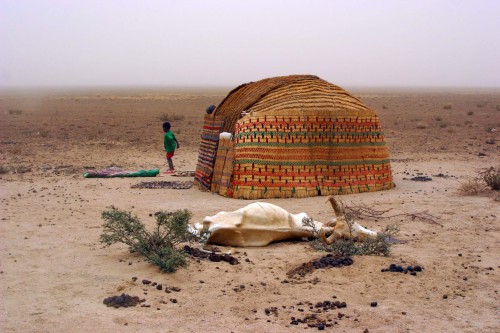 A high rate of livestock deaths is reported from Ethiopia’s Ogaden region due to drought and other factors. UN Photo by Gijs van’t Klooster.

The often irreversible loss of human habitat to deserts and rising sea levels are among the most vivid effects of the change in our climate. Increasing temperatures contribute to rising sea levels and cause deserts to expand. These changes are relentless and accelerating. The most intense impacts are taking place in Southern and West Africa. But the largest populations at risk from desertification are in India, China, and the United States, which in 2010 have more than 2 million people threatened. That figure will rise to nearly 8 million by 2030. And worst hit among them are low-lying countries, such as small island developing states, nations with large river estuaries, and communities living in arid zones or drylands. Rising sea levels are estimated to cause USD 65 billion in losses each year today, a figure expected to rise to almost USD 100 billion in losses each year by 2030 as coastal lands are quietly flooded, degraded, or completely submerged.

Most of the measures we have for counteracting the effects of these trends involve major environmental management projects, which run into the millions or tens of millions of dollars and take years to implement. Given the fact that most programmes take time to deliver positive results, it is important to implement them quickly in areas where the impacts are currently the most extreme.