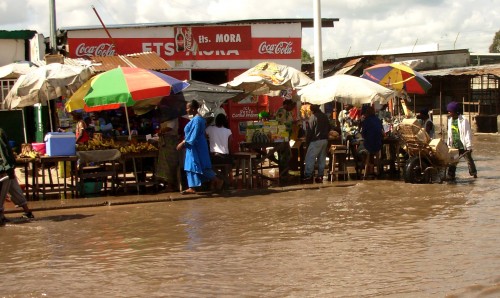 Salesmen in Congo wade through water at a market in Brazzaville, November 2006. IRIN/Laudes Martial Mbon.

Many economic sectors are sensitive to climate, just as many diseases are. While in the short to medium term some regions will reap benefits from warmer weather, overall, the additional stress of climate change will harm economic output and growth. It will also contribute to worsening global inequalities. The primary sectors of the economy are most sensitive to climate change, in particular agriculture, crops, livestock, and fisheries. Valuable environmental assets such as coral reefs, alpine rainforests, and species are also impacted negatively by global warming.

In most cases, the economic impacts of climate change are actually making the rich richer, for example in some sectors of Northern Europe. The worst losses are being felt in countries that are already poor, especially in Africa, Central Asia, and Southeast Asia.

For economic growth to continue in countries worst affected by climate change, it is crucial that they be able to adapt to the most serious economic stresses. The poorest communities will rely on external assistance. Several major concerns, such as mass global shifting of fish stocks and coral destruction, are unlikely to be preventable to any meaningful degree by the types of local actions that are currently available.

We will face further limits to adaptation on the frontlines of scorched dryland regions that receive less and less rain. But a number of effective responses could have extended benefits for socio-economic development that might far outweigh the negative effects of climate change in the near future. Adaptation to climate stresses should be seen as an opportunity to sustain the fight against the worst forms of rural poverty and hunger.