The Climate Vulnerable Forum’s latest flagship report, the Climate Vulnerability Monitor, reassessed the global costs of climate change. Its double-sided “Cold Calculus” juxtaposed the immense human sacrifice of inaction against what it actually estimated as immediate and sustained economic benefits from an adequate global response. Join the debate on the report’s important implications for climate policy with Forum leaders and experts. 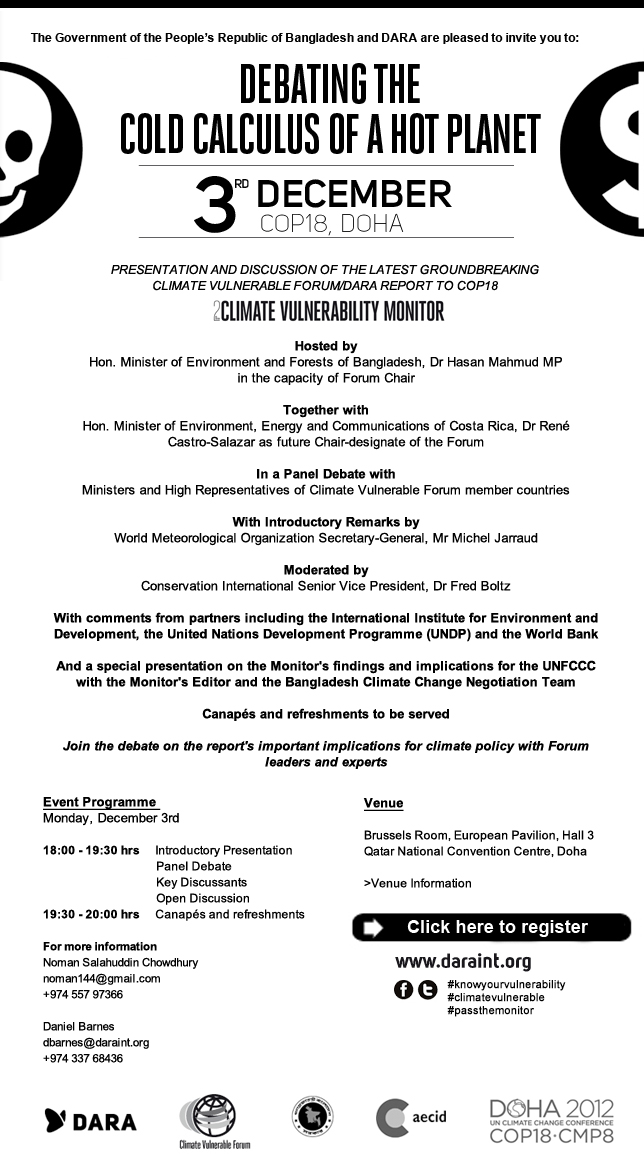 The 2nd Climate Vulnerability Monitor , “A Guide to the Cold Calculus of a Hot Planet” re-estimated the global costs of climate change today using the latest research and data available and considering new concerns, such as the impact of rising heat on the productivity of workers. It found the costs of climate change to be significantly higher than previous assessments. But it also found that firmest action on climate change could be economically justified because costs to tackle the problem are already far lower than the ramifications felt now from an inadequate response. It emphasized that spreading climate action across a wider group of developing countries would heighten the social and environmental benefits of the endeavour. In these respects, is the Monitor really just bad news? What are the prospects of the UN talks establishing truly pragmatic global mechanisms to help more developing countries take part in solutions to climate challenges? Where does the work of the Forum fit in?

The Monitor also highlighted a number of concerns not previously considered by national climate change policy-makers and absent from most adaptation plans, including:

The new Monitor was also the first report of its kind to provide a purely economic justification for global and regional action on climate change in an immediate context, since growing costs already far outweigh the investment required to solve the problem. It found low carbon development and risk reduction efforts as most advantageous for lower-income developing countries already coping with enormous social, economic and environmental damage from inadequate climate action.

The prevailing shortfall in support for developing countries on the climate frontline is immense. But the opportunities for many developing countries currently locked-out from the global drive for low-carbon development are also potentially large in scale – suggesting the Monitor’s findings may not be entirely bad news: It should be possible to tackle the root causes and ramifications of climate change all while generating economic benefits, supporting sustainable human development, and improving the crisis resilience of vulnerable populations.

Within the limited time available, is the international community capable of engineering benefits-for-all global cooperation to resolve the climate challenge? What are the strengths and limitations of the UN climate negotiations to that end? What must change to make progress faster? Where does the Climate Vulnerable Forum fit in?