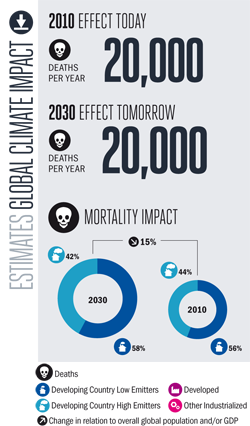 ➔ Malaria is a large-scale cause of illness, with over 90% of deaths occurring among children in tropical regions, in particular in Africa and the Pacific

➔ Malaria and other vector-borne diseases have declined over the last decade, as a result of poverty reduction and anti-malaria programmes

➔ Vector-borne diseases are sensitive to climate; as climate becomes warmer and wetter, changes to their prevalence will slow and complicate efforts aimed at eradication