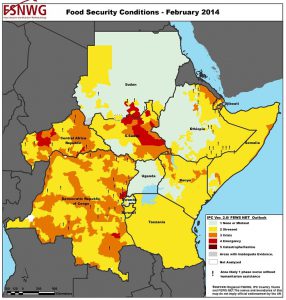 DARA recently conducted an evaluation of the World Food Programme (WFP) Protracted Relief and Recovery Operation (PRRO) in Djibouti, Enhancing the Resilience of Chronically Vulnerable Rural, Urban and Refugee Populations and Reducing Under Nutrition. The evaluation analyzed the extent to which WFP’s Programme in Djibouti has been effective in supporting populations affected by food insecurity and under nutrition, resulting from crises in neighbouring countries as well as consecutive droughts and rising prices. The evaluation dedicated special attention to the chronically vulnerable in both rural and urban contexts and refugee populations.

Djibouti suffers from chronic food and nutrition insecurity especially in rural areas and is particularly sensitive to external shocks, such as increases in food and oil price increases. The country is relatively stable despite a regional context marked by insecurity, particularly from Somalia and Yemen. Djibouti has 19,000 refugees mostly from Somalia. The WFP PRRO aims to ensure the food and nutritional needs of refugees and populations most affected by food insecurity, increase the resilience of rural populations to shocks related to climate change through support to basic social services and asset creation, and support the national nutrition programme through the implementation of activities aimed at prevention and treatment of acute and chronic malnutrition of vulnerable groups.

The evaluation ran from June 2016 to December 2016 with a field mission in September/October.