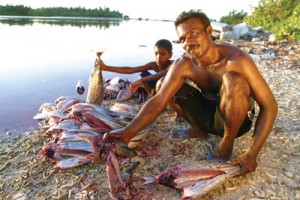 The Maldives relies heavily on fishing for employment, food and exports. Humanitarian agencies and the government are working together to assist fishermen get back to work. ©2006 UNICEF

On the 26th of December 2004, nearly 230,000 people died or disappeared and two million lost their homes in Asia and Africa, as a result of the worst natural hazard in recent times. Simultaneously, the largest humanitarian operation in history was initiated: the first system-wide study of a humanitarian response to be conducted since development of the approach following the Rwandan genocide. DARA’s experience in the project eventually led to its development of the Humanitarian Response Index. In February 2005, less than two months after the Tsunami, several humanitarian agencies decided to develop a joint evaluation of the international response to the Tsunami. The goal of the Tsunami Evaluation Coalition, in which DARA took part, was to take advantage of the experience of this unprecedented crisis in order to initiate a participatory learning process that would help improve the quality of humanitarian action, including the link between recovery and longer term development; accountability to the millions of people that made donations and to the citizens of the affected countries; and, finally, the consolidation of a joint evaluation model as a precedent for future evaluations. DARA developed a standardized questionnaire previous to the evaluation and in accordance to the TEC. The evaluation used case studies from 11 donor countries, including the European Commission. DARA was the only Spanish-speaking organisation to participate in this process and to disseminate TEC findings in Spanish.

In 2008, DARA was selected to participate in the Joint Follow-up Evaluation of the Tsunami Evaluation Coalition- Linking Relief Rehabilitation and Development (LRRD 2), and the organisation examined the long term effectiveness of the response to the 2004 Tsunami in Indonesia, Sri Lanka and the Maldives. A consortium led by Channel Research, including All India Disaster Mitigation Institute (AIDMI); DARA and Team C Voter carried out the Second TEC LRRD study. The five main themes that were covered during the evaluation were: the return of the state and civil society; poverty, livelihoods and economic recovery; rebuilding the social fabric and community development; reduction of risks from natural hazards and conflict; and capacity development. The objective of the follow-up evaluation was to identify linkages, both positive and negative, between relief, recovery and development activities, investigate results and consequences of those that have taken place during the more than three years after the disaster and formulate lessons to be learned and recommendations. The analysis was carried out for learning purposes. DARA carried out the evaluation in three steps: a documentary study, a field study, and a synthesis report and consultation.

Download Summary Report: A ripple in development? Long term perspectives on the response to the Indian Ocean tsunami 2004