Evaluation of Humanitarian Assistance to Saharawis

Evaluation of DG ECHO’s Actions in the Saharawi Refugee Camps

The results of DARA’s recent evaluation indicate that, after more than thirty years, basic needs have yet to be met in the Saharawi Refugee camps.

The organisation was selected this year by the European Commission’s Humanitarian Office department (ECHO) to evaluate its humanitarian assistance to Saharawi refugees displaced by the conflict over Western Sahara.

DARA’s findings indicate that there is an overall static humanitarian situation in the camps with minimal prospects for linking relief, rehabilitation and development. The evaluation concludes that additional coordination and collaboration at the international and local level is crucial to resolve this situation.

The three-month study, between April and June 2009 was the first evaluation of DG ECHO’s support to the Saharawis living in refugee camps near Tindouf, Algeria, since 2001.

The evaluation team assessed the impact of funding decisions between 2006 and 2008, focusing on the validity, effectiveness and efficiency of the food and nutrition, health, shelter, water and sanitation aid provided to around 150,000 refugees in the camps. 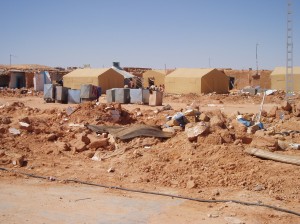 The evaluation aimed to advise DG ECHO on priorities, recommendations for improving the impact of the humanitarian response and help orientate future actions to be funded.

The methodology chosen included a document review, an ad-hoc questionnaire and semi-structured interviews with key informants. A total of 157 interviews, both at HQ and field level, were carried out and triangulated with self-conducted as well as pre-existing survey results.

The Saharawi Refugee camps represent a unique protracted and forgotten crisis. They were established in 1976 in the wake of the conflict between the Polisario Front and Morocco. Since then, for over thirty years, between 90,000 and 200,000 people have remained heavily dependent on international aid.