The Risk Reduction Index (RRI) has emerged due to the growing need to understand how and why disaster risks are generated and, ultimately, how to deal with those risks in terms of reduction and mitigation. Disaster risk reduction plays an important role in the context of sustainable development, especially in countries with high levels of exposure and vulnerability to natural hazards. 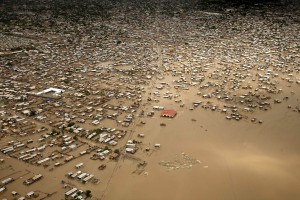 Hatian Village Devastated by Tropical Storm “Hanna”. An aerial view of the houses in Haiti in the floods caused by the Tropical Storm Hanna. UN Photo/Marco Dormino

According to the reinsurance company Munich Re, in 2011 more than 27,000 people were killed worldwide by approximately 820 natural catastrophes which accounted for about US$ 380 billion in global economic losses. Since 168 governments signed the Hyogo Framework for Action in 2005, much has been achieved in the area of raising general awareness on hazards, disasters and the risks they pose to different populations, as well as on the need to act in order to reduce their impact on populations and livelihoods.

However, although many countries have developed policies and strategies to reduce the impact of natural hazards, the need for more integrated approaches to effectively reduce the risk to disasters is still largely unmet. In addition, there are very few efforts that assess the effectiveness of such risk reduction activities.

The RRI seeks to fill an important gap in our understanding of disaster risk reduction (DRR) and climate change adaptation (CCA), by generating evidence, knowledge and concrete action plans that will help local administrations, national governments and relevant regional bodies to address the underlying risk factors, hence contributing to more effective risk management and, ultimately, to the decreased vulnerability of people with regards to natural hazards.