Hydro-meteorological events cause the majority of loss of life and economic losses in West Africa.

According to the World Bank (WB) reports on the “Status of Disaster Risk Reduction in the Sub-Saharan Africa Region” (WB 2008 and WB 2010), disasters, particularly related to meteorological and hydrological hazards and climate extremes, are increasing across the West Africa region, and also exacerbated by unplanned and unregulated land use, weak environmental controls, poor enforcement of building standards, urbanisation, and other development-linked factors that increase the vulnerability of people and livelihoods. 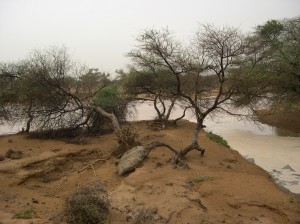 Hydro-meteorological events cause the majority of loss of life and economic losses in West Africa. These include floods, droughts, tropical cyclones and strong winds, storm surges, extreme temperatures, forest fires, sand or dust storms, and landslides. Africa as a whole has the highest mortality-related vulnerability coefficients for droughts and very high coefficients for cyclones and volcanoes. Drought and floods account for 80 per cent of loss of life and 70 per cent of economic losses linked to natural hazards (WB 2010).

At 3.3 to 3.7 percent annually (WB 2008), African urban population growth rates have been and will continue to be the highest in the world. African city-based populations are growing faster than their counterparts in all other regions of the world and are estimated to continue to do so in the next two decades and very likely beyond. There are strong linkages between high urbanisation rates/high concentration of assets and increased vulnerability to hazards.

Epidemics and famine, the most significant causes of loss of life, are strongly linked to meteorological and hydrological conditions but also to the high urbanisation rates. In addition, the ongoing climate change process will result in increased intensity, frequency and variability in the patterns of hydro-meteorological hazards.

West Africa continues to face significant challenges, where both the interrelatedness of and the need to integrate disaster risk reduction (DRR) and climate change adaptation (CCA) into development and poverty reduction strategies are exceedingly evident. Confronting them will require addressing the physical, social, economic and environmental factors that combine to create situations of great vulnerability across the region.