DARA has provided technical assistance in Haiti to the Spanish Agency for International Development Cooperation (AECID in its Spanish acronym) in its EU Presidency commitment to contribute to the coordination of the on the ground response.

In the aftermath of the earthquake which struck on January 12, DARA travelled to Haiti to contribute to the maximization of aid efficiency. 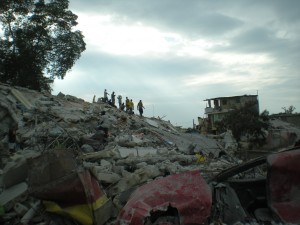 The objective of this mission was to contribute to the coordination of the response, supporting the leading role of the UN and local authorities. It involved both human and material resources, alongside mechanisms to link with the coordination systems and stakeholders working in the field. The mission carried out needs assessments, shared information and pointed out gaps and bottlenecks.

In past evaluations, particularly during the Tsunami Evaluation Coalition (TEC) and in Humanitarian Response Index (HRI) missions to Haiti, DARA reported that a lack of coordination between donors caused confusion, delays in aid delivery as well as the duplication of efforts. “Effective coordination ensures an adequate, effective, equitable and flexible allocation of aid,” said DARA’s Director General Ross Mountain. “In Haiti, I was impressed by the readiness of humanitarian donors to work together and adjust their support in real time to meet needs as they evolved.”

DARA welcomes the Spanish government’s commitment to put humanitarian issues at the forefront of the EU agenda in order to build bridges between member states when cooperating with the most vulnerable countries.

In the case of Haiti’s reconstruction, Spain can play a leading role within the context of its Presidency. Spain is the largest donor to Latin America and prior to the most recent earthquake, it was one of the few donor countries providing assistance to Haiti. “Since only 3 out of the 27 member states have on ground representation in the country, it can be expected that Spain will lead the EU’s common aid efforts in Haiti for far longer than the official six months,” said Mountain.