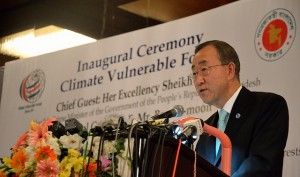 DHAKA, 14 November 2011– Nineteen of the most vulnerable countries to climate change have today agreed to present a unified front filling the leadership vacuum ahead of COP17 in Durban as they signed the Dhaka Declaration of the Climate Vulnerable Forum, following a major ministerial meeting held in Bangladesh. Inaugurated by the UN Secretary General, Ban-Ki moon, participating countries insisted on urgent adoption of a comprehensive and legally-binding global agreement capable of fully attaining the objectives of the UNFCCC.

The Forum’s Declaration called on Durban to ensure securing of a second term of the Kyoto protocol without a gap between the first and the second, and a legally-binding agreement on greenhouse gas emissions cuts. It also included committing the group of vulnerable countries to low carbon development and called for a new global Climate Vulnerability Monitor on low-carbon development.

José María Figueres, trustee of DARA, the international organisation that supports the CVF, and former president of Costa Rica commented:

“Vulnerable countries are insulted by the finance default. I call on all countries present to occupy Durban.“

The Dhaka Declaration also reaffirms the commitment by climate vulnerable countries to focus on adaptation, particularly in the short term in order to minimise immediate danger, and calls on developed countries to support the implementation of schemes. Similarly, the declaration recognises an urgent need for technology transfer from the international community as a means of ensuring fuller and more pragmatic technological developments. 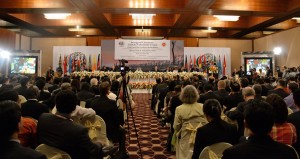 “Governments [of major emitters] must lead the way to catalyze the $100 billion dollars per annum from public and private sources that was pledged to 2020. Durban must complete what was agreed last year in Cancún.”

Climate Vulnerable Forum
The 2011 Dhaka Ministerial Meeting of the Climate Vulnerable Forum has been convened by the Ministry of Foreign Affairs and the Ministry of Environment and Forests of the Government of Bangladesh. The Climate Vulnerable Forum is the first global partnership of nations from Africa, Asia, the Americas and the Pacific united against a common threat as some of the countries most vulnerable to the effects of climate change. Forum countries have contributed least to a problem that threatens, in many cases, their very survival. The Forum first convened in the Maldives in November 2009 and adopted a declaration that expressed alarm at the pace of change to the Earth caused by climate change and sealed the commitment of participating nations to work in concert towards strongest action tackling global warming and its negative effects.

For more information on the Forum visit: www.mofa.gov.bd

View the PDF of this press release