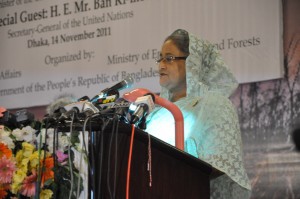 Her Excellency Sheikh Hasina, Honourable Prime Minister of the Government of the People’s Republic of Bangladesh

Let me welcome you to Dhaka for the Climate Vulnerable Forum 2011. Climate change is a reality for the world. It has been causing large-scale loss of human life and irreversible damage to the environment, ecology and natural resources. Climate change caused over 300,000 additional deaths last year. The economic cost was over $130 billion, though estimates may vary. However, vulnerabilities are increasing. Moreover, there is certainty that the impact will increase if we do not take adequate and timely measures.

This Ministerial meeting in Dhaka affords us an opportunity to collectively think about our response ahead of the Durban climate change meeting. The presence of an array of Ministers and high level delegations attests to the increasing concerns of vulnerable countries. This also manifests their determination to seek an effective response to the ever-growing threat and to forge an effective partnership. I thank you, Ministers and delegates, for your kind presence. Secretary-General Mr. Ban Ki-moon deserves special mention for finding the time to attend the Meeting and to express solidarity with our cause.

Since the Earth Summit in 1992, we have not been able to secure much progress in the reduction of greenhouse gases, their emission is still on the rise. This trend is unsustainable and damaging for the Earth. We, the vulnerable countries, suffer the most due to our limited coping capacities.

“Given that many countries are shying away from their obligations, we, as the greatest sufferers, ought to take the lead.“

Climate change is seriously impacting our livelihood and imposing huge costs to our development efforts. We are confronted with daunting adaptation challenges; some of our countries even face existential threats. We are bearing the brunt of the damage though we made negligible or no contribution to the menace. This constitutes a serious injustice and must be acknowledged by the global community. This demands immediate rectification and remedy.

The global climate landscape has evolved considerably since the Forum first met in November 2009 in Malé. Progress under the UNFCCC process is very slow and inadequate. We do not see any concrete moves to support nationally determined adaption initiatives undertaken by our vulnerable countries. Initial thoughts on modalities for the release of fast start finance do not inspire our confidence.

We see no evidence of direct and easy access to funds and technology; conditions and criteria seem to favour countries that have greater capacities. We now have a situation where the most vulnerable countries, which deserve the highest level of priority, are failing to access whatever support that is being realised. We must therefore ask for a set of criteria to prioritise vulnerable countries based on their risks, impacts and lack of coping capacities. Then, we see tendencies to confuse climate change support with development finance. Partners should provide us with new and additional support, beyond development assistance to meet additional costs faced by us due to climate change. Funds being generated for the 2010-12 period are falling far short of commitments made in Cancun. Similarly, we see no clarity on how the global community would raise funds in the period between 2012 and 2020 towards operationalisation of the Green Climate Fund.

On mitigation, we see extreme reluctance on part of major emitters. Absence of a convergence on obligatory and voluntary mitigation commitment is already casting a shadow over the Kyoto Protocol. This may wreck the international climate regime and put our countries at the risk of peril. Hence, we should not hesitate to demand accountability for inaction. We should ask the industrialised nations to accept their historical responsibility and assume greater mitigation commitment. Similarly, emerging economies should also accept their moral responsibility and accept voluntary mitigation commitments based on equity and their own capacities.

It is widely accepted that the gravest effect of climate change may be on human migration. Last year, 42 million people were newly displaced by rapid-onset natural disasters. Extreme weather events are already displacing many more people than violent conflict. Slow-onset events like sea-level rise and desertification get even lower global focus. We must work towards correcting this imbalance. We must appreciate that migration could be an effective adaptation strategy, as we focus on enhancing adaptation capacities of affected communities. Hence, relocation and protection of displaced persons need due focus in global discourse to ensure their protection. We need to commence discussion on the creation of an appropriate framework to address the needs of people displaced due to climate change.
[youtube vNeY_yynoWg 232 190] Video of the speech from Priyo News Bangladesh
Bangladesh and other vulnerable countries have not been able to wait for an international response to climate causes. Bangladesh therefore adopted the ‘Bangladesh Climate Change Trust Fund Act’ in 2010. We have so far allocated Tk. 21 billion (US$ 280 million) from our own resources to the Fund. Some 62 Projects are being implemented utilising the Fund to mitigate the adverse impact of climate change. We are implementing 134 climate change adaptation and mitigation action plans. We have finalised the ‘Operation Manual’ for utilising US$ 125 million as a grant under Bangladesh Climate Change Resilient Fund. Cyclone shelters, extension of climate resistant agricultural system, greenery along the coastal belts are being developed utilising the Fund.

A couple of weeks ahead of COP17 in Durban, we, the most vulnerable countries, should seize this opportunity to identify our collective concerns and articulate them. Primacy of adaptation over mitigation for our countries must be accepted. Given that many countries are shying away from their obligations, we, as the greatest sufferers, ought to take the lead. Let us commit to internalising the green development path best suited to our own specific circumstances and, without compromising on sustainable development and poverty reduction, our overriding priorities.