The role of the UK in international humanitarian assistance is quite unique. While overall DFID is the third largest humanitarian donor, it exercises disproportionate influence within the humanitarian sector as it seeks to improve the system as a whole, largely employing its resources and humanitarian capacities through partners- the UN and its agencies, the Red Cross/Red Crescent Movement and NGOs. 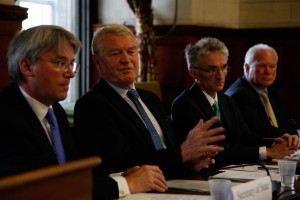 The record of the UK in promoting humanitarian reform and other innovations is well respected. In the wake of the mega disasters in Haiti and Pakistan, it was decided that the Review should focus on how DFID might most effectively contribute to meeting the major humanitarian challenges-including those arising from climate change, urbanization and political instability- that increasingly threaten the future of vulnerable countries and populations. How it might promote changes necessary for partners to be better prepared to meet such challenges was also an essential part of the Review.

The Review was issued on March 28th in London by Paddy Ashdown in the presence of the UK Secretary of State, Andrew Mitchell. In the face of criticism of increasing instrumentalisation and politicisation of humanitarian aid, the HERR clearly reaffirms the importance of humanitarian assistance being determined by needs alone and full respect for humanitarian principles.

As last year, future demands are expected to outstrip the ability of the international system to respond. The report thus emphasises the importance of preparation, anticipation and mapping of potential disasters and conflicts, as well as building resilience in at risk countries to strengthen their institutions and the capacity of local populations to react. Building resilience will in particular require development actors, including DFID, to focus on building such local response capacity as a vital part of their development programmes.

Detailed recommendations are included for each of these dimensions with the aim of improving the support that DFID and the international community will be able to extend to victims of disasters, conflicts and other hazards in the uncertain future.

These recommendations, if followed, offer a coherent approach to ensuring that appropriate, urgent and effective relief can be made available to victims of rapid onset crises.

Ross Mountain is Director General of DARA. He was Director of the United Kingdom’s independent Humanitarian Emergency Response Review (HERR).