HRI 2009 on the road to Washington 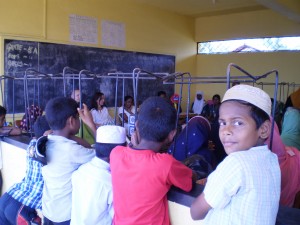 As part of research for the 2009 edition of the Humanitarian Response Index, DARA field teams have visited a total of 13 crises countries across four continents. Interviews have been conducted with over 450 field representatives of humanitarian organisations, local authorities and NGOs and a total of over 2000 survey responses on donor behaviour in these crises have been collected.

The visits are part of DARA’s research for the 2009 edition of the Humanitarian Response Index (HRI), which will be launched on 10 November in Washington DC. The index assesses and ranks 23 of the world’s wealthiest donors on their response to humanitarian crises around the world.

For example, during a field visit to the West Bank and Gaza in March and April, DARA researchers assessed the humanitarian situation and interviewed more than 50 aid organisations about the support they have received from their international donors.

The response of donors to the humanitarian emergency following Israel’s offensive in Gaza last December and January has been generous. However, DARA’s initial findings also suggest an undermining of the humanitarian principles of impartiality, neutrality and independence in donorship.

In Gaza, denial of access to those affected by the crisis was a particular problem as was the failure of donors to respond more precisely to their needs. The provision of unsolicited donations suggests that efforts to achieve better donor and operational coordination still have some way to go.

During its mission, DARA visited some the worst effected areas of Gaza and the West Bank including Gaza City, Rafah, Hebron, Nablus and the district of Qalqilya.